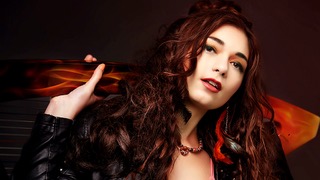 Your real first name is Tsvetelina, did you change it to Flora when you came to W. Europe?
No actually. I moved to China in my late teens for my first job as an artist. I made quite a few friends from Spain. They could never pronounce my real name properly so I translated it to them. Tsvetelina is a Bulgarian name which means “Flower”. In Spanish is Flor. So everybody started calling me Flora and then later on I added “lyn” in the end for my stage name – Flòralyn!
Were you born in Sofia in a family of musicians?
I was born in a small town close to Sofia. Both my parents are musicians. My mum is a classical pianist and my dad is a hard rock drummer from an 80s band called Silluette. Although they are very different, they both enjoy listening to ABBA and BeeGees
When did you decide to start a musical study?
I was 9 when my mother started a singing academy in our town. The academy had about 20 pop vocalists between the age of 4 and 25. I was so excited about the whole thing that I learned every each song that was learned at the academy including the other vocalists’ individual material. I guess they didn’t like me for that because I seemed to do better than them. Then I won a couple of awards for singing and I got an offer to study in the National School of Music in Sofia.
Were you stimulated by your family?

Not at first. They didn’t want me to become an artist because they knew that the path can be quite taught and challenging sometimes. However, that is exactly what I like about it now! After my first stage appearance in town when I sang “Let’s get loud” in front of 15K people I guess I changed their minds. They have fully supported me ever since. When I started studying in the city they moved as well so they can support me along the way and ensure I take the right decisions.
Ever considered another instrument than the harp? Or did you start with piano?
I started piano when I was 4 but I found it very boring and I stopped. I guess that’s why I chose the harp, I thought it was different. Now when I lay my hands down on the piano it feels amazing and I use it a lot for producing my tracks. I like the cello and the saxophone though. I think they’re very attractive instruments that I’d love to learn if I have more time.
Did and do you also play classical music? 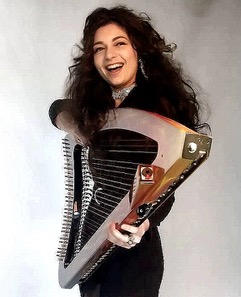