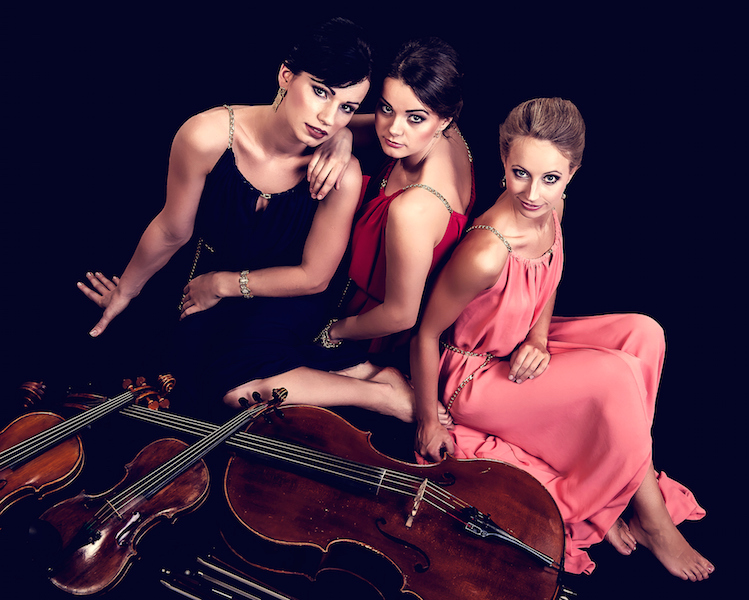 In the world of string trio’s your position seems a rather special one. In the first place while it consists of two violin and a cello instead of the usual violin-viola-cello format. In the second place because on the one hand you are performing on ‘traditional’ instruments and on the other on ‘silent’, electric ones.

Yes, the concept of La Phoenix is quite special indeed. When we got the idea to start a new group, it took us some time to figure out what would be the best for us. As one of our members – Sandra – can play violin as well as viola, we thought that creating an “unusual” electrical trio is not a bad idea. Still, we can also perform as a classical  trio with acoustic instruments. Consequently we suit to every event and for everybody.

Are you regularly appearing both ways? What makes the difference? Normal instruments for performances in small halls, electric ones for big ones and open air?

There are two options for our shows – as there are many classical trios everywhere, we are concentrated on making something different and new. So the main thing we do is a real show perform  with electric instruments in programs that mainly consist mainly of pop music and contemporary versions of classical music hits. With acoustic instruments we play rather classical music without any playback. The variety in styles allows us to play at different types of events – from weddings to clubs.

Was it Johanna that took the initiative forming the new ensemble? 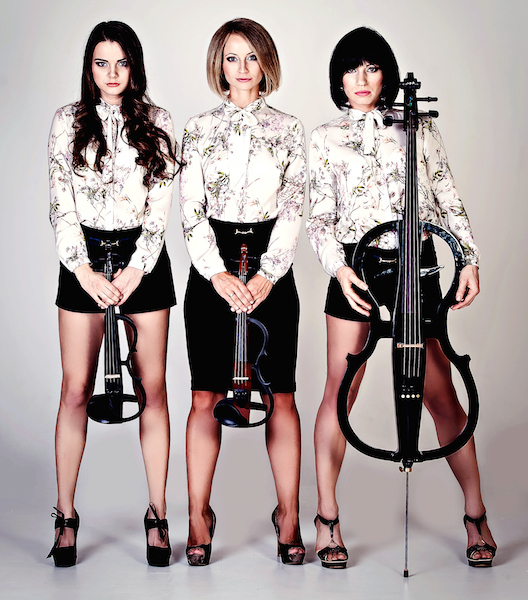 The idea to form the group La Phoenix was born in Italy where Johanna and Sandra were studying together. The Italian culture, the way of living and a positive mindset were a great inspiration and it gave birth to the new musical group. The name La Phoenix has a little hint to Italy as well ("la"- in Italian feminine article). The word phoenix is perfect to describe the girls themselves – sparkling personalities with exceptional ideas and with the will to fly high and far.

Then it must have been an advantage to have already a certain dose repertoire. How many numbers are standard at the moment?

Although we have all played in some other groups before, we decided not to take any repertoire from the past, so everything is new.

Our repertoire consists of pop-, rock-, movie-, folk- as well as classical music pieces. Playing different kind of music makes it more interesting to play and to listen.

Give some examples of what you’re playing regularly during a concert.

Our absolute favourites are Avicii’s "Hey Brother", Coldplay’s "Viva la vida", Vivaldi’s “Storm”, Sting’s "Englishman in New York", Taylor Swift’s "Shake it off", Michael Jackson’s "Smooth Criminal" and so on and so on...

How many pieces are on your repertoire?

At the moment La Phoenix has around 20 shownumbers, but there are coming more each day. Our classical repertoire is quite endless.

Who makes the arrangements?

We do make the arrangements all by ourselves. As we are doing it all together it certainly takes us more time because every one of us has many good ideas. Eventually it is worth every minute op preparation because we all are very motivated and perfectionistic to get what we want!

How many concerts do you give average per year?

Until now La Phoenix has an average of  7 concerts per month, that means around 100 concerts per year and it is only our first year!

Are you intending (hoping for) video/cd recordings?

Some day it would be nice to give out a CD, but at the moment it is not in our priority to-do list.

You all are active present on the internet, in the social media. Does that add to your reputation, to invitations? What is the most effective promotion type?

Nowadays it is very important to have a facebook fanpage where people can easily find you. We keep our fanpage always updated with the newest info about our concerts and other stuff. It is the easiest way to promote our programs and engagements.

What about appearing on the radio and TV?

Until now we have visited many of Estoni’as most popular TV programs and given some interviews for radio stations. It comes with the package of becoming a well-known band. Without giving any interviews it is hard to reach your potential clients.

Is there any anecdote or special happening that you can mention?

We have had some melodramatic cases during our performances

that luckily have all ended up well. For example once Sandra somehow broke all the hair of her bow in the middle of a song and did not have another one. The only solution was to continue playing with her finger – pizzicato. It was actually really funny for all of us and gave our live performance a new dimension.

A bit more about you three personally now. The Estonian music world is rather small, so the three of you probably studied in Tallinn at the Estonian academy of music and learned to know each other there. We all have been good friends since primary school, because we studied together at Tallinn Music High School which we all graduated in 2010 and continued our studies at Estonian Academy of Music and Theatre. In addition to La Phoenix, we also play together in different professional orchestras. It is important to make music with your friends and not just with coworkers. Then you understand each other much better.

From Johanna Marie I know she started in the electric string world together with Daana Ots and Käll Haarde in the Violina trio. That collapsed in 2014 and she started La Phoenix. Has that name anything to do with rising from former ashes?

It really has something to do with our past, but mainly we would describe phoenix as a beautiful colourful bird, as bright as our personalities. By way of compensation I'm a member of Estonian National Opera and I was with Sinfonicamnte.

But your ways went different routes. I know from Silvia that she played salon music in restaurants for a living and that she is/was a member of the Femme quartet and the Estonian national symphony orchestra. When and why did you take up the electric instrument?

For now, Silvia has played in several bands and orchestra and also performed as a soloist with different orchestras. But she also is a member of the Femme quartet and plays in the Estonian National symphony orchestra. As she loves to play different kind of music, she is attending in different bands like Sandra Nurmsalu band and Reinaru Brothers – they play nice rock’n’roll music. She is also making music with her sisters, who are all musicians. But most of the time takes preparing for a pretty important competition in Estonia – Silvia, of course, hopes to have a great success there.

From Sandra I know nearly nothing, so please do tell me a bit about her background, experiences and ambitions.

Sandra was also a member of Violina from 2012 , that is when she became interested in electric instruments. As a violin teacher at school she needs to make something different and interesting and that is not playing in an orchestra day by day. Sandra has a really active character and she always keeps us going.

Were you often invited for performances outside Estonia. I know from Johanna that she recently was in Peru.

There are many countries all over the world where we have played with different groups and orchestras. The most exotic places we have been are Peru, South Africa, Australia, India and Thailand. As La Phoenix we only have performed outside Estonia in Norway until now, but we already have some engagements for our concerts in the beginning of next year in Italy and other European countries. 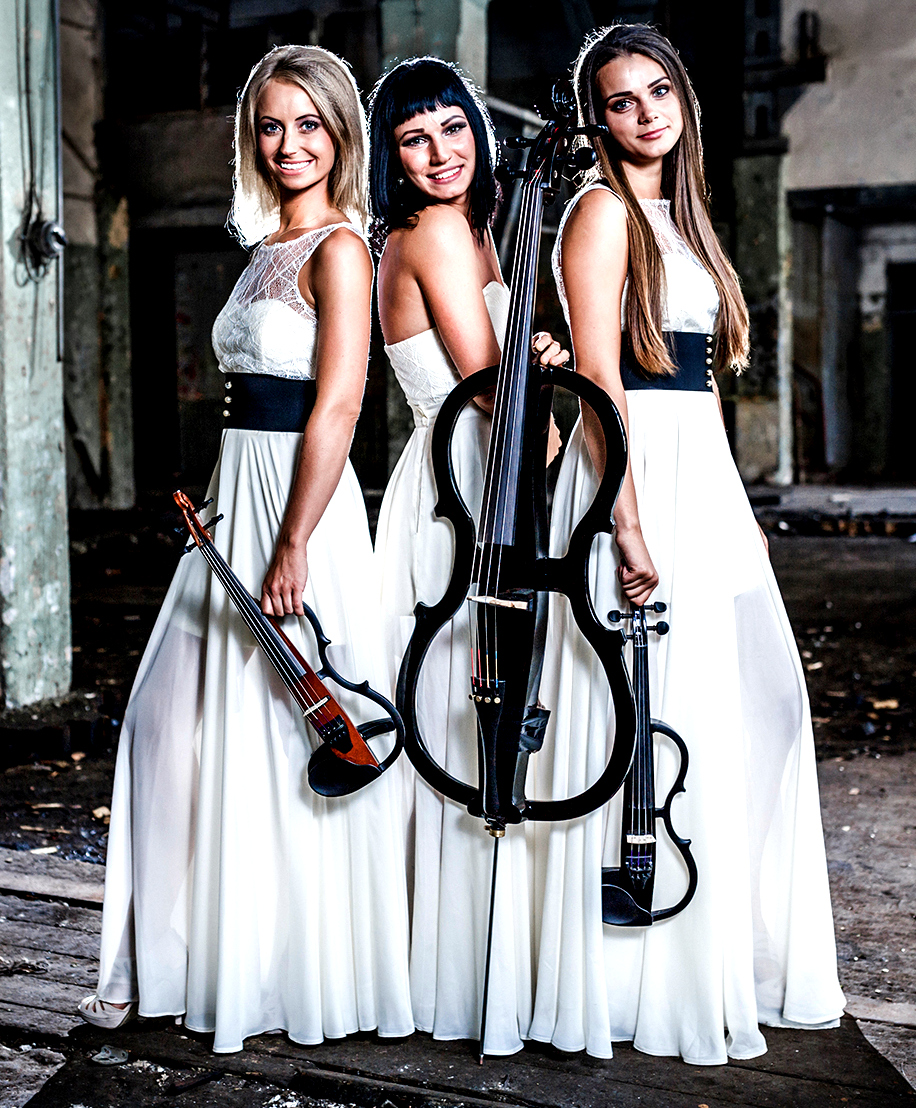 Is there a difference in appreciation of your playing inside and outside Estonia?

The audience is a little different everywhere, but if people really like something, they usually also show it. For us it does not matter where or to whom we play, we always give our best!

Do you know there is an American/Chinese piano trio La Phoenix?

How can people show their interest and fan appreciation?

By surfing to our internet accounts. First here is a link to our newest video, which you can maybe add: